â€œI came to Bali and I just felt right." Iâ€™ve frequently heard these vague words when people try to describe why Bali has been a life-changing place for them.

Bali has become more than a mere recreational getaway. People find many forms of enlightenment here, be it through the islandâ€™s majestic scenery, the laid back and religious lifestyle of the local residents, or the culture in general.

An annual forum dubbed the TEDxUbud, held for the third time earlier this month, appeared to give Bali an additional boost as a place where mind-blowing experiences can be found. 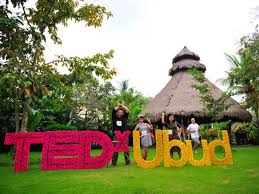 TEDxUbud is part of a global nonprofit movement borne out of the TED (Technology, Entertainment, Design) conference in the US in 1984. This movement focuses its activities on spreading a variety of ideas.

Under the slogan â€œIdeas worth spreading", it has expanded into discussions surpassing the three initial categories. In a nutshell, the forum provides stages for people who want to share their ideas through a presentation that can last from 5 to 20 minutes, known as the TED Talks.

TEDxUbud was organized by a number Bali-based individuals under the leadership of Daniela Burr, who was determined to bring the wonders of TED to the island.

In its third year, its attendees have tripled to 300 people.

â€œWe are really over-booked today, and we also have 150 people on the waiting list," Daniel Ziv, co-curator and moderator of the event, told The Jakarta Post Travel.

Potential attendees are filtered through their resumes, before being given a ticket to the event.

This year is the first time the TEDxUbud implemented an entrance fee, and the regular tickets, sold starting from US$9.00, were sold out within a week of being announced.

The first speaker of the event, Erin Threlfall, opened the event with a question: â€œDo you know how to be happy?" Then she talked about a project she carried out in her class to encourage people to feel happier in life.

Another speaker, Ruici Tio, talked about rampant human trafficking practices; Ernest Prakasa did a stand-up comedy performance, then talked about the issue of breastfeeding and the importance of the fatherâ€™s involvement; Peter Wall talked about his exciting experience in making films with his family. These are merely a few samples of the talks heard this year.

One of the most anticipated speakers named Black, was a professional yo-yo performer all the way from Tokyo.

Black started his performance with a short story on how he decided to follow his true passion of yo-yo playing that lead him to become the world yo-yo champion, which then led to him performing at the world famous Cirque du Soleil Circus act.

The TEDxUbud sets itself apart from other TEDx events through its surroundings. It is held in The Five Elements venue near Ubud village, which features bamboo-based buildings and beautiful gardens.

The dishes served are mostly healthy with many vegetarian options.