His victim was teammate Jerry Brown, a 25-year-old linebacker from St. Louis. Brown, a passenger at the time of the crash, was a teammate of Brent's at the University of Illinois.

This comes on the heels of Kansas City Chiefs linebacker Jovan Belcher committing suicide in front of his coach and general manager last Saturday after murdering Kasandra Perkins, his girlfriend and the mother of his 3-month-old daughter.

The Belcher case was quickly seized as a political opportunity – pounced on to discuss everything from guns laws, to football's violent way, to concussions. Brushed over was the core issue – Belcher was a bad guy, a cowardly murderer. Yet even as the tangents strained, the voices just got louder.

If the Brent case is going to go the same way, with big publicity and pointed discussion, then let it be used for a more practical purpose: to continue to remind players and fans alike of the dangers of drunk driving, particularly in the NFL community where it remains a scourge.

[Related: Josh Brent pleaded guilty to DUI while in college]

Let it be used as one more example for the need to plan ahead, to call a cab (or limo for some of these guys), to find a designated driver, to stay home or anything else to avoid this absolutely, 100-percent preventable issue.

Even Belcher drove after drinking last week. Police discovered him at 3 a.m. last Saturday sleeping off a night of partying in his Bentley, which was parked yet running. The cops gave him a break; he was allowed to go inside a nearby apartment complex and get some rest. Hours later, he went home and shot Perkins nine times.

He likely could've been detained at 3 a.m.

DUI is the league's biggest legal issue. A study by the San Diego Union-Tribune found that 112 of the 385 NFL player arrests (29 percent) between 2000 and 2008 involved drunk driving.

Belcher's crime was spectacular but beyond rare. The NFL doesn't have a murder problem. It doesn't even have a gun problem. If anything, the league's players are better behaved than the general public. That same Union-Tribune study found players arrested at a rate of one per 47. The U.S. population was one per 21, more than twice as often.

However, drinking in excess then driving remains difficult for the league to curb, the one issue it just struggles to contain.

It's not all that different for the rest of the country. We've been trying to wipe out drunk driving for generations now – from the formation of MADD, to the lowering of legal alcohol levels to endless mass publicity campaigns. There is no one left that doesn't realize not just the dangers of driving drunk but also the likelihood of getting arrested. There may not be anyone who doesn't know at least one victim.

[More: Jerry Brown remembered as good teammate who never 'had a bad day']

Yet it continues over and over, probably because it's a split-second decision, often made when a person's judgment has, by definition, been chemically altered.

This wasn't even Brent's first trouble with the issue. He plead guilty in 2009 to DUI while in college. He was sentenced to 60 days in jail, community service and ordered to sit in on a victim's impact group.

It didn't take.
Again, this is a societal problem. The NFL doesn't want this. The NFL already stresses it to players at every turn. It used to run what was called the “safe ride” program to get players home, but it was taken over by the NFL Players Association in 2009 over concerns about confidentiality. The NFLPA still operates it 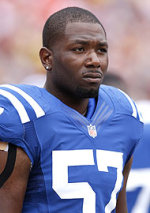 [albeit at the cost of $85 per ride, more than most cabs] with the phone number on the back of every union card. Both groups can only attempt to do more.

If there is one NFL trend that may be exposing itself here is that players, perhaps in higher numbers than expected, are partying hard on Friday night with a game normally less than 48 hours later.

Young people are going to go out. That's unlikely to ever change, but maybe teams, or the league overall, can focus on providing safe rides or significant reminders on that night of the week. Who knows? Let there be more discussion on potential solutions.

Belcher committed a wild act that brought demands and finger-pointing from every possible angle, regardless of if they were germane to the issue.

Brent's crime is more common, less eye-popping and almost non-political. There aren't any special interests to inflame or any pending lawsuits to build an argument off – the stuff that drives too many news cycles today.

This, however, is the bigger deal. This is the most likely crime a NFL player will commit. This, sadly, wasn't all that shocking.

Here's hoping the issue gets the same high-profile discussion, because even if we've all heard it before, everyone can use another reminder.