We may give Kristen Stewart a lot of flack for being a Grumpy Gus on the red carpet, but last night at the 26th Annual Nickelodeon Kids' Choice Awards, she proved that she's not afraid to have a little fun. After receiving the Favorite Movie Actress and Favorite Female Buttkicker blimps for her role as Bella Swan in the final "Twilight" installment, the 22-year-old actress seemed enthralled by the whole sliming process, swirling her hands in the goo left over on the podium and 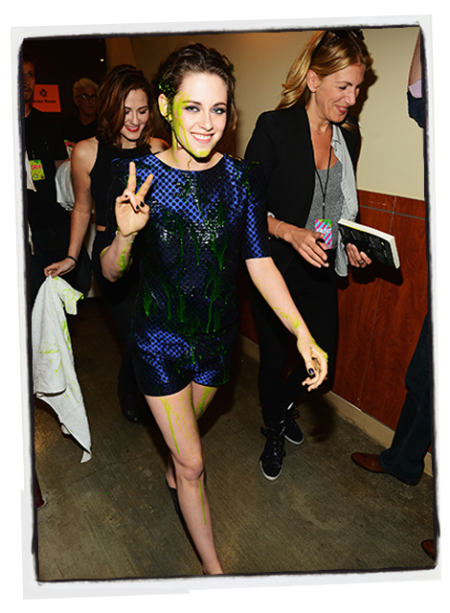 exclaiming "Dude! I was too much of a coward to accept this and now I'm like, 'What was I thinking?!'...this is really cool!" She then embraced the recently-slimed presenters Sandra Bullock and Neil Patrick Harris. Bullock is no stranger to the Nickelodeon Kids' Choice Awards' slime tradition--in 2009 she got a massive slime attack with co-presenter Hugh Jackman. And it looked like she really wanted to share the love with Stewart. The two actresses shared an on-stage snuggle after Bullock got doused from all sides moments before, so it looks like Stewart got slimed after all! The Kids' Choice Award-winner smeared slime all over her chic Osman outfit, smiling from ear-to-ear the whole time.

During Stewart's acceptance speech (and before the slimy hug) she thanked her fans for being "overwhelmingly amazing," and told the crowd that in Kindergarten she had a t-shirt that said "Kick butt first, take names later," making her award win that much more appropriate. The fun continued backstage, where Stewart relished her first-time sliming, and even posed for a messy picture with her presenters. One big slimy family!

Normally we cringe at most gunk-covered moments (if only for their stylist's sake. Aren't those clothes dry-clean only?!), but this is the happiest the actress has looked in recent memory, so we're psyched that she had a moment of unmitigated joy. Who knew she looked so good in neon green? Maybe next year she'll more-readily accept a solo slime moment!